​TERRA INCOGNITA
A Novel about the Crypto-Jews of Spain

“Papa, why is Grandpa so against strangers?” Vidal asked.
“Sant Joan Januz is a small village. If people with different customs started moving in, our traditions would disappear.” 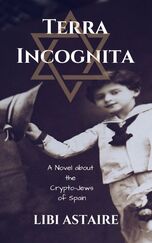 Terra Incognita. For the medieval Catalan navigators the term meant an uncharted territory that inspired either fear or the thrill of adventure. But for the characters of this new novel by Libi Astaire, winner of a 2010 Sydney Taylor Notable Book Award, “terra incognita” is a place inside the soul. It is a place drifting in the dreamy waters of an almost forgotten past; a place that is about to collide with an anxious, uncertain future.

The story revolves around the Bonet family, who live in a tiny Catalan village called Sant Joan Januz. Vidal Bonet is a young businessman determined to revive his dying village by building a luxury resort. His grandfather, Miquel, is just as determined to keep the village locked away from strangers and their prying eyes.

Their battle for the future of Sant Joan Januz is further complicated by the arrival of a Jewish-American graduate student from Kansas, Chaim Green, who is sure the villagers are his long-lost relatives. And, finally, there is Clara Bonet, who has reluctantly takeon the role of the family’s matriarch just when the village’s long buried secret is accidentally uncovered: They are all descendents of Anusim – Spanish Jews who were forced to convert to Christianity during the Middle Ages.

Both poignant and comic, Terra Incognita is a journey of personal discovery that will resonate with anyone who has ever gone on a quest to discover their past – or who has ever lain awake at night wondering where in the world they are going.

Buy it at Amazon.

Read about more about this fascinating chapter in Jewish history, when you go "On the Trail of the Jews and Crypto-Jews of Spain and Portugal."
Enjoy this Review from Casa Shalom, the Institute for Marrano-Anusim Studies at Netanya Academic College:

"Although marketed as fiction, Terra Incognita is important in the way it portrays the attitudes of these people even in modern times, and should encourage all Jews to be aware of the subject and do all possible to aid the Marranos-Anusim."

This novel began its life as a four-part series on Jewish Catalonia for Mishpacha Magazine.

Although this book is listed as a novel, the author intensively researched the background to the story she produced. The narrative concerns people in a Catalonian village named Sant Joan Januz. A young local man, Vidal Bonet, returns home to this Catalonian backwater after obtaining a business degree in New York. He is full of ideas for making their rural town into an upscale modern resort, a scheme not well received by the residents, especially the older generation. Then Chaim Green, a Jewish anthropology student from Kansas, appears in the village, determined to discover descendents and links of his forbears who were forced to flee from Spain because they secretly continued Jewish practices. He too, much to his surprise, gets no co-operation from the locals. Both men doggedly press on with their ambitions. Through the tensions in the families and the communities caused by the juxtaposition of old and new, tradition and change, the reader becomes aware of the endurance of the Jewish people over so many centuries. Both of the young protagonists, as well as the people of Sant Joan Januz, will be changed forever.

This novel is important because it shows us links to the crypto-Jewish traditions not only of Catalonia, but also many Balearic Island families. We are familiar with many of their descendents, who admit to their Jewish identity (although this book does not mention this connection). Ms. Astaire's research concerning this area is top notch. I have had numerous contacts and revelations regarding these little-known villages in Spain, as well as elsewhere in the world with a Hispanic link, and we find that they are almost all of Marrano-Anusim origin. Even today, they continue with their customs and way of life, but strangers are rarely welcome, unless they can prove a strong connection to Israel. Although marketed as fiction, Terra Incognita is important in the way it portrays the attitudes of these people even in modern times, and should encourage all Jews to be aware of the subject and do all possible to aid the Marranos-Anusim.