A young Jewish orphan goes missing in London during the great Frost Fair of 1814. Is he merely lost? Has he been kidnapped? Or killed?

An ancient coin from the Land of Israel disappears during a dinner party. An honest mistake on the part of someone, or is someone trying to swindle one of the guests?

A sukkah is destroyed in London’s East End. A priceless diamond and pearl bracelet is lost in fashionable Mayfair. A coincidence? Or is there some hidden connection lying deep beneath the surface?

Once again there’s trouble afoot in Regency London’s Jewish community, and in these three mystery stories wealthy-widower-turned-sleuth Mr. Ezra Melamed is confronted with some of the most baffling cases of his career.

Included in this volume are: Too Many Coins, What's in a Flame? and General Well'ngone in Love. Plus, there is a bonus chapter about the history of Regency London's Ashkenazic Jewish community. Available at Amazon.com.
The Three Novellas Can Also Be Purchased Separately at Amazon & Other Online Bookselllers
​ 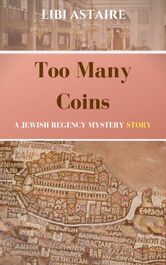 TOO MANY COINS: A Jewish Regency Short Mystery
"A wonderful drawing room mystery with just the right amount of complexity and intrigue." - Amazon.com

While  the Lyon family is hosting a dinner party for a young man from the Holy Land -- Judah Birnbaum, who has come to England to raise funds for his community in Safed -- an ancient coin dating back to the Bar Kochba Revolt goes missing, and the most likely suspect is the unfortunate Mr. Birnbaum. But why would the young man jeopardize his mission by stealing the coin? For once, Mr. Melamed has too many clues—which makes the matter of the missing coin one of the most wholly baffling cases of his career.
​
​Buy the ebook at Amazon, Barnes and Noble, Apple, Kobo and other online booksellers.  Or join the Jewish Regency Mystery mailing list and get your free copy!
​

What's in a Flame? A Jewish Regency Short Mystery
"I have never read a mystery like this: the logic of Sherlock Holmes, humanitarian values, and Jewish traditions all delightfully combined." - Amazon.com

In this short Jewish Regency mystery story set during the Sukkos holiday of 1812, a sukkah (booth) is vandalized on the first night of the Jewish holiday -- but nothing is stolen except a dozen candles. ​Why would anyone steal candles and leave behind the much more valuable silver candlesticks? The solution to this seemingly trivial puzzle is more surprising than even Mr. Melamed imagined.

​Buy the ebook at  Amazon.com, Barnes and Noble, Apple, Kobo and other online booksellers.
​

GENERAL WELL'NGONE IN LOVE: A Jewish Regency Short Mystery
"One of the most charming tales that I have read in a long time." - Amazon.com

​In this short story set during London's Frost Fair of 1814, a recently orphaned boy disappears, seemingly off the face of the earth. Mr. Melamed enlists the aid of General Well’ngone, a young Jewish pickpocket, who  has his own reason for wishing to find the missing child—the General has fallen in love with the boy’s older sister.

Buy the ebook at: Amazon, Barnes and Noble, iTunes and other online booksellers.
​

The Melancholy Menorah: A Jewish Regency Short Mystery
"Another fun,light read from this terrific author." - Bite of the Bookworm

​It’s a miracle! Or is it? When the members of London’s Great Synagogue decide to replace their old and battered menorah with one that’s newer and more elegant, the old menorah refuses to leave its spot on the Eastern Wall. But is this really a sign from Heaven, or a sign that some nefarious plot is afoot? It’s up to wealthy-widower-turned-sleuth Mr. Ezra Melamed to solve the mystery—and solve it before Chanukah begins.

​Buy the ebook at Amazon.

​In this newest addition to the Jewish Regency Mystery Series, London’s Jewish community is getting ready for Purim—and more mystery.

When Bashe Bunzel insists on marrying the man she loves, her wealthy father threatens to disinherit her. But the new will is soon stolen, and then Mr. Bunzel also disappears. Was he murdered? And what happened to the will? The complications multiply with dizzying speed in this short mystery where, in the Purim tradition, no one is quite what they seem.