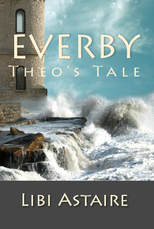 Sometimes the hardest dragon to slay is the one inside you.

When Theo—a misfit with a passion for music—is rejected from a top music school, he feels like he has nothing left to live for. His awful day gets even worse when he falls into Everby, a “Post-Catastrophe” kingdom where hope and happiness are banished in a cynical struggle for wealth and power.

After a short imprisonment, Theo is appointed court musician—a seemingly safe position in this chaotic world. Very soon, though, he unwillingly gets caught up in the court intrigues surrounding the upcoming marriage of Everby’s Prince Rodepho to Princess Dora, an idealistic young woman desperate to escape from her unhappy fate.

The princess thinks she has found a kindred soul in Theo, but he knows he’s no storybook hero. Much as he admires the princess for her idealism and courage, he is too broken by his failures to help her—until tragedy forces him to realize that in Everby there are only two options: die or dare to dream again. Get your copy of this new coming-of-age fantasy novel at Amazon.   Or read an excerpt here.